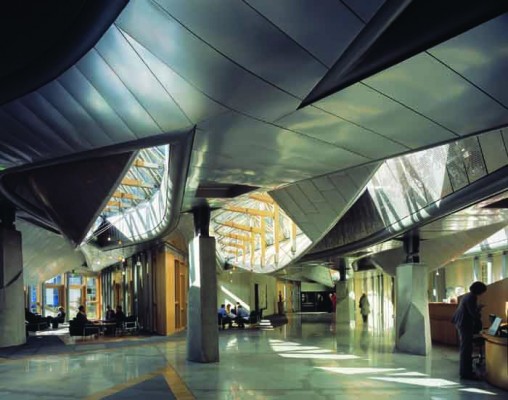 Edinburgh Architecture Walking Tours – include a visit to the building & description of the exterior:
Contact Isabelle Lomholt on 07952 149814 or isabelle@e-architect.com

1 Oct 2012 – The controversial Scottish Parliament security extension is due on site imminently (8 Oct). There has been a demonstration by architects and reports suggest a visit by Benedetta Tagliabue (of EMBT) might happen.

Security entrance to be built at the Scottish Parliament:

Here is text (anonymous) from a letter sent to the Presiding Officer:

I wish to take this opportunity to formerly object to the new doorway proposed on the Scottish Parliament Building.

I think it is a shame that the parliament has acted out-with its founding principles of openness in transparency, in order to add another layer of security to itself and create a shroud of suspicion, paranoia and hysteria.

I wish to state that the way parliament has acted in commissioning this work has been suspicious, and very disappointing. It is the peoples building, and no parliamentarian has any right to deface it without first consulting with the public about all the options, and the designers to choose.

The proposed extension is appalling, and will spoil my future experiences of entering the parliament building. It has no style, no characteristics and equates to the equivalent of an abscess on the façade of one of the premier works of architecture in Scotland.

The cost of this extension is astronomical. Please can you itemise why exactly it is costing so much money?

I am concerned that in positioning the new entrance directly in the roadside blast-zone, you will be endangering lives of those queuing within and outside the new extension. Can you please confirm that the parliament did consider the legal ramification of acting against official advice from industry experts during the planning stage, should any injury or worse occur as a direct response from ignoring this advice?

Can the SPCB please also highlight why the people were not consulted about a design, and why MSP’s have not had the chance to vote or consider the proposed Scottish Parliament extension.

I suggest that MSPs should re-read every stanza of Edwin Morgan’s poem ‘open the doors’, for right now, they are acting wholly out-with the principles that were conjured by Enric Miralles’s masterpiece.

I urge that this extension is halted.

If you need help with your essay you could consider writing services.

Another letter re the Scottish Parliament Security Entry:

Further to my email sent today on the same subject, I want to add the following:

I worked on this building for nearly four years. I was one of about 40 architects in Edinburgh and at least the same again in Barcelona who did so. We weren’t just doing this for fun, we were answering a brief. There’s a rationale to the security entrance as it has been built. Every detail of how this building works, every swipe card door, every blast window, has been designed in accordance with the wishes of the SPCB. For the same people to change this now and to breach the line of security that they authorised is madness.

You know, this building not just a sketch of leaves and grasses blown from Arthurs Seat, it’s a building which evolved exactly according to what the client wanted and also manages to have layers of symbolism which take it far beyond pure functionalism. This is steadily being ruined by paranoid steps advised by paranoid consultants, divorced from the reality of what this building is achieving day by day.

It improves their health. It enhances their sense of social responsibility. Somebody should measure this. This has not happened by mistake or as a byproduct of a design which just meets the brief, it has happened because it is a work of genius. The proposed security entrance defaces it and does not improve the safety of those in or around it.

Please consider this and stop the extension immediately. It is in your interests and in the public interest to do so.

Scottish Parliament bosses were today accused of creating “Fortress Holyrood” after they decided to go ahead with a controversial new £6.5 m security extension, report the Edinburgh Evening News.

If someone did want to attack they would surely find a way. This building has been plastered with security windows, doors, bollards, systems and now this, a security entrance. Seems like a backward step for Scottish society. Adrian Welch, editor.

Adrian Welch, formerly a Project Architect on the Scottish Parliament said: “There have been a whole series of changes to the frontage of the Parliament since 9/11, whilst still under construction, and indeed since it was completed. The proliferation of bollards is both risory and saddening. The original concept (pre 9/11) to open up the glazed ground level facade in this area for visitors was generous of spirit and in keeping with Miralles’ vision of a parliament rooted in the land and strongly connected to its people.

At each step in this ‘security arms race’ we see the connection between parliament and people wane. Back in the 70s football terraces started to gain fences and the fences grew taller each year until fans were corralled like prisoners behind intimidating towers of mesh. That all came to an end with the tragedy of Hillsborough. But afterwards the fences came down and for the better. A new system emerged which has with a few pitch invasion blemishes worked very well and has led to a better connection of people and the game.

This goes to show what can be done if systems are reworked to allow better connection. All around the world we are fortress building at present yet are we any more secure? Rather than discuss the architectural merits of this proposed entrance I would ask our government, ‘through trust can we not connect better with the people?’”

Professor Alan Dunlop told e-architect:
“There seems to be a lack of drawing information contained within the planning documentation which is needed to make a proper judgement on the merits of the proposal or otherwise. The visual shows very little of significance and the plans and elevations seem to be cut too short, you must see the whole sweep of the front elevation and plan to appreciate how the new addition fits in or does not. From the information posted the new approach looks apologetic. The design is understandable perhaps in plan but results in something more like the entrance to a local council office that the People’s Parliament.

Having said that the architects had a difficult job, it would not be easy adding to the work of such an original architect. The whole client brief though appears suspect and only seems to highlight the flaws in the Miralles design. The public entrance to the original building was always disappointing and a trial to negotiate, I don’t know how this will make it any easier, frankly.”

Visit and try to understand the legacy of late architect Enric Miralles – check with the Scottish Parliament: Contact on 0131 348 5200 or 0800 092 7600
Debating Chamber access depends on parliamentary business

Scottish Parliament Building Tours: scroll towards base of page for details

Architecture Competition announced by Scottish Office in 1998: 12 architect teams shortlisted, then narrowed down to 5 groups of Scottish + foreign architect teams. Enric Miralles + RMJM Architects won and by 1999 the Assembly Building was on site in Holyrood.

Outline
Controversial Issues such as choice of site, timing, architect (non-scottish), followed by escalating costs (from an unrealistic benchmark), left the design of the Scottish Parliament Building often neglected in the Press. Sir David Steel, Presiding Officer of the Scottish Parliament claimed “This building is the most important to be built in Scotland for 300 years“: although this no doubt refers back to the Act of Union in 1707, the point has architectural validity too.

The New Scottish Parliament building is divided as follows:

Holy Island Boat – influence: photo © Adrian Welch 2006
Fred, from the Mac, told me he had driven Enric to see Holy Island one time, and he had been very taken with the boats, but maybe not realised the importance of having crossed the border! Anyway all architectural inspirations are valid on their own merits wherever they come from.

The Scottish Parliament Building can be viewed from the Canongate (Royal Mile), Horse Guards and Holyrood Road, Edinburgh Old Town.

Edinburgh Architecture Tours can include a visit around the building’s exterior
info(at)edinburgharchitecture.co.uk / 07952 149814 for details

Archived images of the Scottish Parliament available upon request to info(at)edinburgharchitecture.co.uk

: best buildings in Scotland of the last three decades

– Best Building in Scotland winner in 2005

The building enjoyed a moment of notoriety a few years back, when it was touted as the possible casino location (where some of the core scenes would take place) for the 21st Bond movie Casino Royale.

What Percentage Can You Borrow on Equity Release